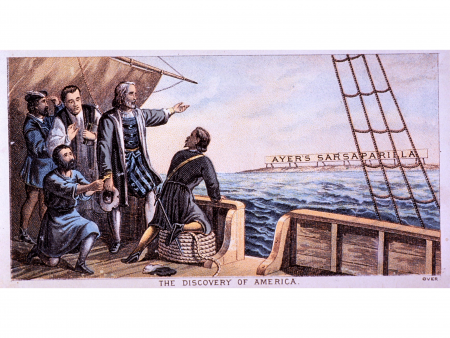 Description
The trade card shows Christopher Columbus arriving in the Americas, only to find that Ayer’s Sarsaparilla had already reached the continents. Ingredients in the product included sarsaparilla root, mandrake, and yellow dock herb, and 26% alcohol. Like many patent medicines of the time, Ayer’s Sarsaparilla claimed to cure a plethora of diseases and maladies, marketed as a universal cure for at least 25 health conditions. These disorders included edema, “female weaknesses,” rheumatism, tumors, neuralgia, blood impurities, and syphilis in addition to promoting energy and strength. Ayer’s Sarsaparilla would be the company’s greatest success.

Rights
Courtesy of the U.S. National Library of Medicine. This image is in the public domain.